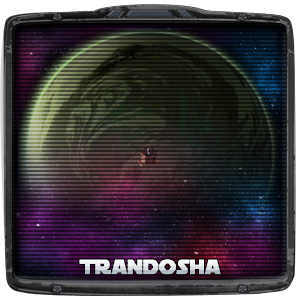 The planet joined the Galactic Republic around 7000 BBY, but by the time of the Great Sith War, it had not integrated itself into the Republic as thoroughly as other planets. Around the time of the Jedi Civil War, the planet negotiated with the Czerka Corporation to gain slaving rights to Wookiees, beginning a millennia-long struggle between the Wookiees and the Trandoshans.

In the end of the New Sith Wars, it was the site of the Battle of Hsskhor, where the Trandoshans launched a surprise attack on both the Republic and the Sith when they retreated to their camps to rest.

In 23 BBY, a Wookiee vessel was attacked over a moon of Trandosha, resulting in a Wookiee blockade of Trandosha. Peace talks to resolve the issue were conducted 22 BBY and failed when it was revealed that the Trandoshans were pushing for Senatorial representation with Trade Federation backing.

Due to its position within the Kashyyyk system, Trandosha’s only representation in the Galactic Senate was Yarua, a Wookiee. The two species had never seen eye to eye, and their relationship was, at best, lukewarm at the outbreak of the Clone Wars due to a number of factors.

Though never committed to the Separatists cause in a public forum, a number of independent Trandoshan organizations joined forces with the CIS during the Clone Wars. Pirate bands, slavers, and pro-Trandoshan terrorist groups participated in many Separatist actions, particularly those that take place on the Wookiee homeworld prior to the Battle of Kashyyyk. In truth many of these groups had indirect financial backing from Trandosha itself, as the planetary government was only too happy to direct its own attacks upon Wookiees from the shadows.

After Darth Krayt’s Galactic Empire initiated a blockade of Kashyyyk, most of the system’s commerce began to flow through Trandosha, giving the planet an economical boost. The Trandoshans used the influx of credits to upgrade their cities and technology and buy new starships and weapons, becoming a significant military power in the galaxy.