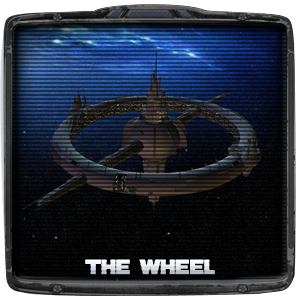 “Its size makes it appear closer than it is. But the Wheel’s reputation does not rest on its size. There are other constructions in the galaxy larger, more awesome… The Wheel is a monument. A monument to pleasure, to risk, to greed. And, to those with the need or the desperation… It is also a monument to life and death.”
―Statement on the Wheel’s importance

Well-known for its casinos, this space station resembles a huge wheel, with a central axis consisting of the main fuselage of the station. This axis is an immense cylinder, and at its midpoint there are four main spokes leading out to the circular promenade and inner-rim city. At the main axis’s top is the Wheel executive tower, where administrators live and work.

From the tower, people can access the main transport tube and travel through the entire installation in airflow cars. There are several other transport tubes besides the main one, but it has access to the Imperial dock, reserved for military personnel during the time of the Galactic Empire. All parts of the station are equipped with containment doors that cab seal off damaged sections during an emergency. These walls are blast-shielded.

Sprouting from the circular section are nearly 100 docking piers, allowing any size of ship to safely approach and dock with the Wheel. Beyond these luxury docks, thousands of buoys are placed to allow for less expensive docking, with shuttles providing guests with transport to the station.

The outer section of the Wheel, which gave the station its name, is a sprawling city with an untold number of casinos, including the Crimson Casino and the Grand Casino, which are two of the Wheel’s star attractions. Deep in the central axis is also a gladiator arena, where all manner of beings are forced to fight to the death for the entertainment and wagering of the Wheel’s visitors.

The security and main systems of the Wheel are run by Master-Com, a super computer capable of projecting his consciousness into several droid bodies provided for him, in an unusual gesture of friendship between Human and droid, by Senator Simon Greyshade so he can move around the casino and to make him seem more Human.

Security is provided by a heavily-armed and well-trained organization known as the Wheel Security Force which helps enforce the law aboard the Wheel, as well as provide armed escort for winners of large jackpots at the casinos. In space, a fleet of ten Guardian-class light cruisers provided traffic control.

During the height of the Empire’s New Order, the Wheel was situated inside an “immunity sphere,” which meant that Imperial ships were not allowed to come to the station and all within could enjoy themselves while they were aboard. Only “financially worthy” customers were allowed to land. Those wishing to dock needed to have accounts totaling at least 10,000 credits. The Empire had a space landing platform just outside the immunity sphere with two system patrol craft.

However, Senator Simon Greyshade, the station’s administrator at the time, paid his taxes regularly and often to appease the Empire. He also adhered to the Empire’s anti-alien biases, and while the station catered to Humans and near-Humans equally, any disputes that arose on the Wheel between alien and Human clients would be handled under the assumption that all alien species were “guilty until proven innocent.” That policy has since been largely rescinded and rumors persist that the Hutts have gained a controlling interest in the Wheel and its casinos.

The Wheel has managed to retain its independence following Greyshade’s death and the end of Palpatine’s Empire, with The New Republic government not managing to gather enough political will to bring it under control. Greyshade’s successor, Senator T’Rani Remex, has followed in Greyshade’s footsteps and has protected The Wheel from Republic control. She is rumored to be deeply in the pockets of the Hutts.