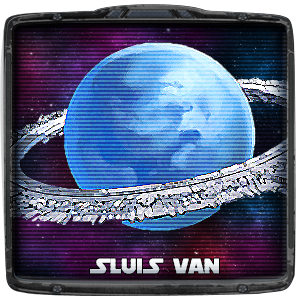 Sluis Van is a world located along the Rimma Trade Route. It is the site of an extensive deep-space docking facility and shipyard, the largest and most impressive in the area. The docking station is defended by perimeter battle stations, while the shipyards are managed by an outer system defense network as well as the Sluis Control. The leader of Sluis Van is called a khedive.