“Remember…the Force will be with you, always.”
―Obi Wan Kenobi

The standard Fate Accelerated Character Creation will be used.

The Galactic Civil War raged on for 50 years after the death of Emperor Palpatine. While the Empire was rudderless and without a single leader for many years it was still a vast and mighty entity with nearly unprecedented military power. It took great sacrifice and herculean effort for the Rebel Alliance to push the Imperial forces to the Outer Rim of the galaxy. For while the Empire utilized a massive and fine tuned war machine it could not stand against the combined economic and military might of the galaxy.

When the Corporate Sector Authority abandoned the Empire toward the end of the war and made a treaty with the fledgling New Republic countless star systems that had suffered under the yoke of Imperial power were liberated. Most of them leaped at the chance to join the New Republic but there were some systems that resisted. The Hutts controlled hundreds of worlds and refused to accept the new galactic government and the Republic’s resources were stretched too thin to do anything about it.

For twenty years an uneasy peace has reigned between the Empire and the New Republic. The Empire, under the rule of the Fel Dynasty, has moderated many of its anti-alien stances and Imperial excesses while the New Republic has struggled to overcome all the errors that befell the Old Republic. 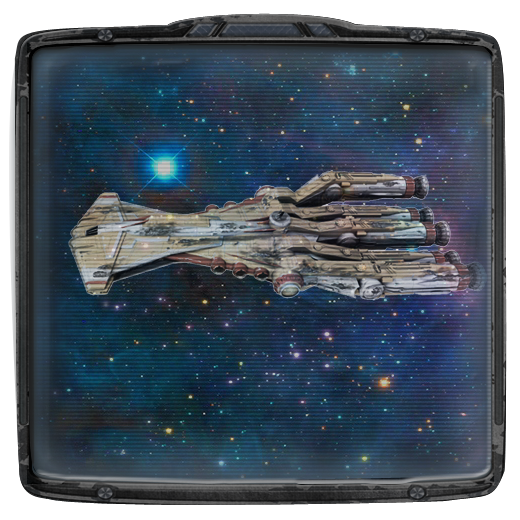 The Crucible is a Jedi Training Cruiser that served the Jedi Order for over a 1000 years. The Jedi Cruiser was manned primarily by droids and served as a transport and library of Jedi Lore for centuries. The ship was shot down by pirates during the Clone Wars but the Jedi Order salvaged it because the archives of the ship and its ties to the Old Republic. However, at the close of the Clone Wars it was considered lost with all hands when General Gisaku Saberota confiscated it to protect it from the Empire and fled Coruscant. It was not seen for over 100 years until discovered by Jaden Windu. Amazingly enough the General, who had been grievously wounded and placed in medical stasis, had survived and was revived after the vessel was discovered. Unfortunately some of the archives that were kept aboard the ancient ship were lost to the ravages of time and what is there can often be difficult to decipher because of codes and ciphers that were placed on them as a security measure by the Jedi Council of old.

After recently discovering Yoda’s hidden holocron on Dagobah, Cortree Tincove was able to download a copy of it to the Crucible’s database. It seems that the ancient Jedi training ship’s memory banks were uniquely suited for such a task.

The Starship has a fully stocked medical bay complete with a GH-7 medical analysis unit. The GH-7 medical analysis unit was a model of medical droid in operation during the final years of the Galactic Republic before the dawn of the Empire. It was manufactured by the Chiewab Amalgamated Pharmaceuticals Company in competition with Geentech’s 2-1B, and designed by a group of Columi.

The medical bay justifies an Education Overcome roll to recover from physical consequences. The GH-7 droid provides a +2 bonus to this roll. Success indicates recovery from the consequence as normal.