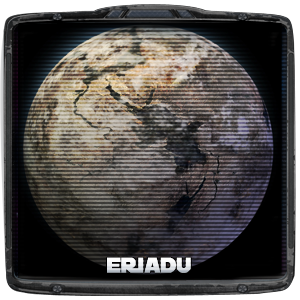 Key Aspect: The Coruscant of the Outer Rim

When Eriadu was first colonized, it was mostly known for its local shellwork, despite sitting on several important hyperlanes. In 900 BBY, the Quintad, five families native to Corulag, took control of Eriadu with the intent of making it an economic powerhouse. They not only succeeded, but the economic realities caused the Seswenna sector to move its capital from Seswenna to Eriadu and reroute the Hydian Way through the planet. However, the surface was full of dirty industry and waste zones that made the atmosphere polluted. Its leaders also sought for Eriadu to bear the title of Coruscant of the Outer Rim which had been held millennia earlier by Taris until it was razed in 3956 BBY during the Jedi Civil War by a Sith fleet under Darth Malak and Admiral Saul Karath.

The planet was represented in the Galactic Senate by Ranulph Tarkin and later by Shayla Paige-Tarkin during the last decades of the Galactic Republic. It remained loyal to the Republic during the Clone Wars, unlike its neighbors Sullust, Mayagil, and Sluis sectors, which joined Count Dooku’s Confederacy of Independent Systems. During the Clone Wars, it was a Republic bastion and served as the headquarters for the 18th Sector Army overseen by Wilhuff Tarkin and was protected by an entire Republic fleet under Gideon Tarkin.

Under the Galactic Empire, the Eriaduans kept non-Human slaves. These slaves were later emancipated by the New Republic. Eriadu was also the most important Imperial drydock.

The planet was the homeworld of Grand Moff Wilhuff Tarkin, formerly lieutenant governor of the planet under the Republic, who oversaw the Seswenna Sector and Oversector Outer from the planet under the New Order. After his death, the Tarkin Memorial Conference Center was constructed in Eriadu City, named to honor the late Grand Moff. After the Battle of Yavin, Ardus Kaine became the successor of Wilhuff Tarkin as Grand Moff of Oversector Outer.

After the Battle of Endor in 4 ABY, Grand Moff Kaine transfered the capital of Oversector Outer from Eriadu to Entralla and founded his own empire in the Outer Rim part of the New Territories.

Soon after, Eriadu became the capital of the Eriadu Authority, an Imperial faction established by Superior General Sander Delvardus. However he quickly lost the approval of the ruling families of Eriadu because he sought to invade the Core whereas the families wanted him to defend the Eriadu system. In 5 ABY, Delvardus was defeated by the New Republic and fled to the Deep Core with his remaining forces.

After the warlord departure, Eriadu returned to the Galactic Empire. During the Thrawn campaign, Eriadu and the Seswenna sector belonged to the core of Grand Admiral Thrawn’s confederation. The Empire lost the control of Eriadu sometime after Thrawn’s death in 9 ABY and the planet became a grudging member of the New Republic.