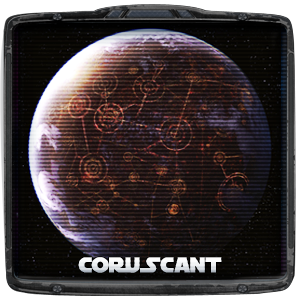 “Seen from orbit, Coruscant is a blaze of light and sparkling colors, reminding some spacers of corusca stones, after which this planet was named long ago.”
―Pollux Hax

Key Aspect: The Bright Center of the Galaxy

Coruscant was a planet located in the Core Worlds. Located at the intersection of numerous major hyperlanes— including the Perlemian Trade Route, the Corellian Run, the Metellos Trade Route, the Koros Trunk Line, and the Leisure Corridor—its hyperspace coordinates were (0,0,0) which effectively made it the center of the galaxy. These coordinates also inspired the planet’s military designation, “triple zero,” though the actual galactic center was located in the Deep Core. As the de facto center of the galaxy, however, Coruscant was generally agreed to be the most important planet throughout most of galactic history, as well as being one of the wealthiest due to its advantageous location.

Coruscant served as the capital for the Galactic Republic, Galactic Empire, and New Republic. It also served at various times as the home of the Jedi Order and the Jedi Temple.

Geologically, the planet was composed of a molten core with a rocky mantle and a silicate rock crust. At its poles were huge ice caps that were popular spots for tourists. The entire surface of Coruscant was covered by sprawling kilometers-high ecumenopolis, and boasted a population of over a hundred billion to several trillion, depending on the era. Following the end of the Clone Wars, an official census noted 1 trillion official permanent residents. The statistics did not include transients, temporary workers, unregistered populace, nor residents of orbital facilities. Because of these omissions, the actual population of Coruscant was estimated to be three times the official record.

Coruscanti skyscrapers dwarfed all the original natural features, including mountains, as well as floors of oceans which once covered a large portion of Coruscant’s surface. Areas of Galactic City were broken up into 5,127 levels which were then divided into megablocks, blocks, and subblocks. Coruscant itself was divided into quadrants, which were divided into zones. Below the skyscrapers was Coruscant’s undercity, where sunlight never reached. Artificial lighting illuminated these lower levels and advertisement holograms could be seen everywhere. There were numerous establishments for entertainment, catering to a myriad of alien species. The residents were collectively referred to as Twilighters.

Coruscant was once a world mostly covered in oceans. However, all natural bodies of water were drained and stored in vast caverns beneath the city as a result of years of overpopulation. The only body of water visible was the artificial Western Sea, with many artificially-created islands floating on it, used by tourists on holidays.

With no other bodies of water available to feed and water its trillion inhabitants, Coruscant’s architects, along with many others from around the galaxy, worked together to build a self-contained eco-system in the massive buildings set all over the planet. Polar cap stations also melted ice and distributed water throughout the planet-wide city through a complex series of pipes.