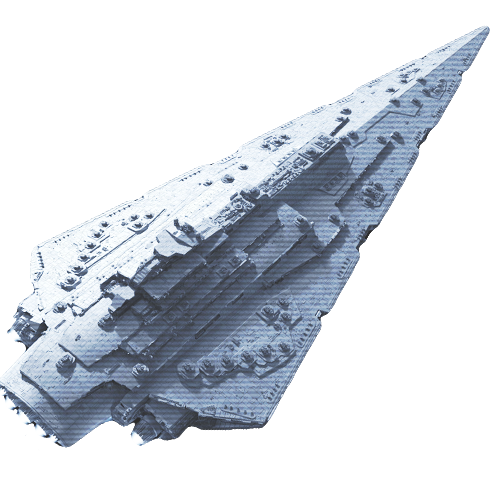 Fight fire with fire, they always say. Every now and then, someone listens. This is one of those times. The Bellator-Class Star Battlecruiser is the pinnacle of firepower. It boasts a bristling array of the most advanced designs in capital ship weaponry available to date. To power them all, designers created a new class of reactors, one almost three times the size of a regular Star Destroyer’s, and they even paired it up with a Star Destroyer’s reactor for good measure.

The development of this ship came from demands for a modestly large ship capable of dealing with ships far larger in size – primarily, Super Star Destroyer-size. Despite it not measuring up to even half the length of an Executor-Class Star Dreadnaught, its specialization allows it the capability of taking out one, on its own.

The hull of the Bellator is somewhat a departure from the more standard designs of Imperial ships. It retains the expected arrow-shape body and over-looking bridge, but the layered decks have been replaced by an armored superstructure which altogether allows the Bellator to be far more resistant to attacks from any direction on it. With the dazzling display of armaments it sports, it’s no surprise it has batteries on every side able to fire in any direction on the ship – even on its stern and underbelly. Needless to say, it’s no meek vessel, and most definitely no light hitter.