“Just for you…. I’ll let you in on a little secret of mine, about how useful a distraction can be. Consider the following…..”
―Maze―

Aspect (Cuts Through Almost Anything), Exceptional x2 (defender can’t use Armor or Stress), Consuming (Costs a Fate point), Limited (once per Scene), Troubling (Symbol of the Jedi), Numerous x1 (2 Shotos)

Shoto Lightsabers are smaller and have no Harm rating unless the wielder is properly trained with them with the Jarkai Form. They have the Aspect: Cuts Through Almost Anything, and once per scene, for a Fate point, the attacker can ignore all armor and Stress of a target to either force a Consequence or, if no Consequences are available, take a target out. They are also recognized galaxy wide as a symbol of the Jedi and Sith.

When attacking with dual blades using Flashy add +1 to attack roll and +1 Harm to any successful attack made.

The character remains unseen by cloaking themselves in the Force. Gain a +2 bonus when using Sneaky in an Overcome action to resist being seen or when actively attempting to go unnoticed by someone trying to sense you in the Force.

With Force Healing a Jedi my use Careful in an Overcome action with the difficulty based on the shift value of the consequence. Mild is Fair +2, moderate is Great +4, and severe is Fantastic +6. A successful Careful roll will justify the healing of a consequence although it will still take the normal length of time for the body to repair itself. This ability cannot be used on one’s self only on others.

Unlike a lot of twi’leks (at least in stereotype), Maze wasn’t ever a slave. He grew up as part of a lage twi’lek family on a planet of little historical note, Mecatol Nova, populated by many different species. He has more brothers and sisters than he really knows about. Both his parents had many children, not always with each other, although they remained together and raised all their children together (although he wasn’t aware of this, both his parents were employed as political seducers and manipulators). Mazer was aware of stories of force sensitives being sent away to the Jedis, so he hid his talent because he didn’t want to leave his friends and family. Buy the time it was discovered, he was in his teens, and his parents (being wise) knew he had to go train with the Jedi, as to do otherwise was dangerous for a force sensitive. Being a willful teenager who’s parents Didn’t Understand and one who Wanted to Live His Own Life (!!!!), he ran away from home (and planet, as a stow away).
The next couple years of his life is a bit of a blur of a bit of ‘scoundrally’ work, young man debauchery, working with/for people on the wrong side of the law. All of this was, of course, flirting with the dark side, unbeknownst to Mazer. He was never malicious, but had a strong selfish and hedonistic mentality.

This eventually came to a climax when he got himself into a situation he couldn’t get himself out of, crossing the wrong person at the wrong time, and was saved by a Jedi – Galen. He jedi recognized Maze’s talent, of course, and his precarious position between the light and the dark. Maze owed him his life, and was wise enough to see where his life so far had gotten him (nearly dead). He’d also matured a bit, and thus willingly became a Jedi student. He’s reformed a lot since then, but he still has the wild streak, and despite his training, will likely never be convinced to abandon it fully.

Mazer Val’Zian is a average height for a Twi’lek or human, with a slightly smaller frame. His skin is a deep blue, as is his eyes.

Through his young adventures, Maze had exposure to many different cultures and races. He’s picked up a bit from each one, and it comes in handy when he can remember the correct piece for the given species or situation. However, this also means he may have a bit of fame, or even infamy, from his past that could prove troublesome.

In Maze’s story, he was tasked with retrieving a cache of light-saber crystals that was known to be on a planet in a system that right in the middle of space contested between CorpSec and the Hutts. Utilizing Jaden’s skill with local lore, and Cortree’s technical expertise, Maze was able to fabricate an circulate a very convincing rumor that a deposit of Bascar’gani, the light-saber resistant metal, was hidden on a nearby planet. With both forces drawn into conflict with one another, and otherwise occupied, Maze was able to retrieve the crystal cache right out from under them, with no one the wiser.

The Battle of Socorro with Galen Argyus and Jaden Windu

ASPECT: No Coincidence in the Force

This is where Maze was discovered and rescued by Galen. Maze had taken a job moving cargo from the Hutts, but later discovered that the cargo was slaves. Furthermore, one was Maze’s siblings. Maze planned a double cross to free them, but was caught. He was likely to be executed when Galen and Jaden showed up.

ASPECT: A Sucker for Heroism

Maze was part of a small party who went along with Saberta to ‘fix’ a troubled planet – one whose terra-forming machinery had gone haywire, and had subsumed sith-corrupted ruins. A colony ship had crashed on the planet. It was up to him, their guide Galen, and the Saberota (perhaps the only one who could stop the machines) to save them. 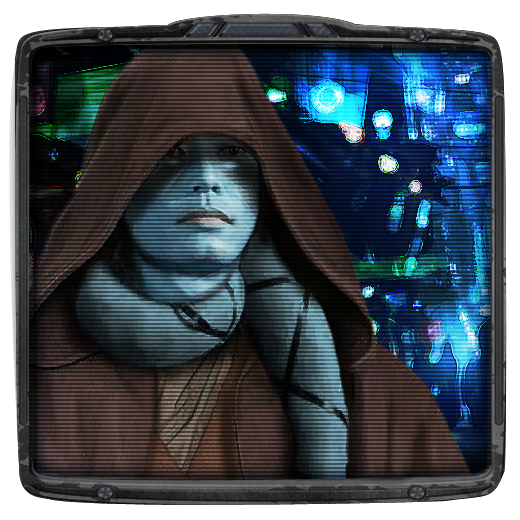