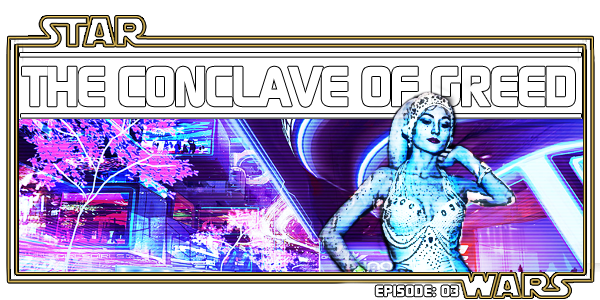 The Wheel is a Space Station on the edge of Hutt Space protected from the laws of the Republic by ancient deals. The station’s casinos and black marketplaces stand both as a Lap of Luxury and a wretched hive of Scum and Villainy…. the perfect place for a team of Jedi Knights to save The Galaxy.

Cortree modified the Crucible’s Transponder to make it appear as the Azure Akkadian to all relevant scans. Upon docking, Mazer used 1000 Credits of the funds they received from Galen Argyus to secure some HIGH-END THREADS to better disguise their Jedi natures and support their story of being in the employ of Porbota The Hutt. Mazer went in as Jarlezek Zemay, Saberota as the tall silent Bodyguard, Jaden as a visiting scholar and Cortree as their accompanying mechanic to check over the condition of the goods. In addition, General Saberota took advantage of his Cyborg Body‘s many hiding places to conceal the team’s Lightsabers.

While mingling around the marketplaces and cantinas of the station they learned as much as they could about the lay of the land. Eventually they made their way to the site of the auction, a ballroom of neon and lights in the famous Grand Casino. A playground of live bands and loud noises. Of luxury and sin.

When the Jedi cased out the station they discovered that the Station’s Security, commanded by the Mandolorian Kel Markatta was as solid as a ray shield. Markatta confirmed their identities, which were solid thanks to Galen, and then gave them a communicator for the auction. After that he dismissed them, warning against any interference with the auction or any conflict with their fellow bidders. The Jedi would not be able to get out if it came to firefight. But they were not forbidden from talking with their fellow bidders.

When they had first arrived, the Jedi discovered a Sveldt-Class Imperial Shuttle (A craft built for stealth and perfect for special operations) registered to a Captain Gellor docked at the station. Jaden remembered that Gellor was one of the Empire’s, “Top Men” and had written a series of papers 20-30 years ago on the ancient history of the galaxy. He was considered an expert xenoarchaeologist.

However, the Captain they found on the Ballroom floor was far too young to be the Captain Gellor who had penned those papers. His entourage of Stormtroopers had the customized weapons and armor of an elite commando team and seemed far more professional than the average Imperial foot soldier.

The second bidder was more like what they had expected. Selan Mela, a history professor at the prestigious University of Coruscant, seemed out of place on the Wheel wearing nice clothes she could barely afford. Professor Mela was a scholar for an Elite Coruscant Educational Society so prestigious that even the scholarly Jaden had been denied entry. She was accompanied by a pair of assistants one of whom seemed unusually quick-witted and strong willed. Upon speaking with Mela, Jaden and the others convinced her to help them by revealing that they were Jedi. They asked her to combine her credits with the Jedi since she clearly couldn’t afford to get the Ship on her own. They promised to turn over any archaeological objects to her for the museums on Coruscant after their mission. As long as the items weren’t tainted by the Dark Side of the Force. She agreed. Albeit reluctantly. She apparently did not hold a very high opinion of the Jedi in general.

The Third Bidder immediately caught Gisaku Saberota’s attention. Rhaan Cheska, the Vice-Prex of Research of the CSA was something of a boy genius who built a little corporate empire of new droids that had taken the Galaxy by storm. Saberota asked Selan Mela if he was any relation to the infamous Thelsamar Cheska, a man who he knew during the Clone Wars… but the scholar admitted that no one had ever considered that possibility. Given his ancestor’s role in the destruction of Cassandra’s Hope during the Clone Wars it would be embarrassing if anyone made that connection. Mela then recognized Saberota for who he was and asked if he would come to Coruscant for an interview about the Clone Wars. Saberota said he would love to as long as she helped them.

Cheska himself seemed like a simple business man and the tech tycoon and was by far one of the wealthiest bidders of the lot. Cortree seemed to get along with him talking about technical issues and droid designs. Accompanying Cheska was his assistant and a Content Not Found: bg-173e-bodyguard-droid. The Droid seemed to Cortree like a top of the line model but it had a critical design flaw. It was so aggressive that Saberota’s very appearance as a bodyguard created a strong reaction and Cheska had to use a hand-held communicator of his own to restrain the Droid with voice command codes.

What the Vice-Prex didn’t realize is that Saberota’s Cybernetic Sensors managed to pick up and record those codes.

The fourth Bidder was an ESPO Commander named Content Not Found: commander-piter-gorlen. Word had it that he and his band of corporate thugs were agents of Gul Shyssa, another Vice-Prex of the CSA. A man whose wealth even outstripped Rhaan Cheska’s.

The Fifth Bidder turned out to be a decently-sized Hutt, Content Not Found: shogothehutt. A Hutt who knew how to get things and a collector of rare antiquities. Jaden had heard of him acquiring a Holocron that had been put up for auction several years before on The Wheel. He was well known as a fence but was far from the wealthiest or most powerful Hutt.

Along with Shogo was his enforcer, the fearsome Wookie, Content Not Found: mazak. When Mazzak spotted the cyborg General he growled in challenge. For Saberota it brought back memories of a campaign on Kashyyyk during the Clone Wars. Memories of War Droids being ripped apart…by Wookiee hands…and this Wookie had a claw made of metal . Saberota’s feelings told him that the Wookiee was a threat and that letting it win was the wise option.

After all the Bidders appeared the entertainment began. The Twi’lek Singer and Dancer called Leela Chab’unu put on a big show for the Auction’s bidders. Her beauty, charisma and grace drew the entire crowd’s attention and even stirred up feelings in the disciplined Jedi Knights…all except for Mazer. He recognized Leela as Rilu Secura, an old flame of his from before he joined the Jedi. Maze had been Rilu’s partner, lover and victim during his old life as a scoundrel. Needless to say their relationship was…complicated.

When Rilu introduced herself to Maze, the pair of them made small-talk with their voices but spoke in secret with their Leku head-tails. Rilu as it turned out was there for her own scam. She had to pay off an obligation to a mysterious patron it seemed. She demanded Maze pay her 10,000 credits or she would out them as Jedi. The Twi’lek Jedi proposed that she would get a better pay day if she helped them get the ship instead. Specifically he asked if she would distract Piter Gorlan and get him out of the running for the auction. He convinced her with the promise of more credits after the job was done. Rilu went to work and proved to be a very very good distraction for Commander Gorlan…

Having met all of the bidders now, the Stations Owner Varn Talath brought out holograms of the Ship and samples of its contents to prove it’s authenticity. Their worst fears were confirmed by the taint of the Dark Side Maze sensed on the artifacts. The Jedi realized that by sheer arithmetic that were unlikely to to be top bidders with what few credits and allies they had.

Cortree reprogrammed his hand communicator, took the recordings of Rhann Cheska’s Droid Security Codes from General Gisaku and exploited its major design flaw by commanding Cheska’s BG-173E Bodyguard Droid to attack Mad Claw Mazak. The Droid reacted with inhuman speed and precision but its blasters didn’t do more than anger the Wookie who tried to rip the Droid limb from useless limb.

The Wookie was only stopped when Kel Markatta and his security team downed the Droid in seconds with one of the greatest displays of precision shooting any of the Jedi had ever seen. Markatta was propelled through the air by his Mandalorian Armor’s rocket pack and he landed between the enraged wookiee and Cheska with his blaster drawn intent on stopping the fight before the wookiee’s rage escalated it out of control. Mad Claw was only barely able to restrain himself, staring down the Mandolorian even with a Heavy Blaster pointed at his head. It wasn’t until the Security Chief primed his wrist mounted flame thrower that the wookie was able to calm himself and back down. The behemoth’s glare promised a reckoning at some future date. The Chief removed his helmet and seemed unfazed by the wookiee’s murderous snarl.

The incident proved for the Jedi who was professional and who wasn’t. The Imperial Stormtroopers that had accompanied “Captain Gellor” were as fast on the draw as the Station’s Mandalorian security, while the ESPOs dragged their commander and Rilu out of there very quickly but in a very disorganized manner. Clearly the ESPOs were little more than thugs in uniforms while the Stormtroopers were elite operators.

With the situation diffused and violence contained Cheska agreed to repay Porbota The Hutt for his droid’s malfunction with 5 units of the same model droid when the kinks are worked out and the droid it put into mass-production.

Varn Talath, disgusted by the unfortunate incident decided to post pone the auction until the next day when cooler heads would hopefully prevail…